Review: The Second Tournament in Vienna

We arrived by plane in Warsaw and reached the correct bus station five hours later. At a nearby cafe we selected random words from the menu: I ate a fish, Yvonne ate something else! The music was interesting because the owner liked to suddenly increase the volume to make his friends jump. Some men fought outside.

The bus did not show up so we talked to some French travellers whose bus was due six hours earlier. When our bus arrived at 02:00 we had tickets for the last seats so the boys were left behind.

At the Czech border I delayed the bus. The guards took my passport into the office and disappeared for half an hour. Most people were sleeping and did not seem to notice. We travelled through Brno and reached the Austrian border at noon. It was much easier getting into Austria and we arrived in Vienna a few hours later.

Christoph guessed that 15 hours on a bus was not a luxury and met us at the station with bottles of iced tea. We met his brother Andreas and went to the University to check his ViennaSweeper program. Thomas Kolar arrived shortly. Mouse acceleration could not be turned off, which would be a problem for my playing style. A few bugs were found in the program...I even created a new one by accident. Then the five of us went out for dinner.

Christoph and I spent most of the evening talking about ViennaSweeper and video encryption.

We took the trains to Volksteater Park and viewed the Hofburg Imperial Palace. Yvonne has a Psychology degree so we went to the Siegmund Freud museum, located in his former house. This took longer than planned because the museum was on Bergasse, not Burgasse street! Later we toured the Spanish Lippizaner Horse stables. Christoph programmed until 10pm, took us out to an ice cream restaurant and then programming during the night.

Christoph, Andreas, Yvonne and I arrived at the University early. Robert and Jan Farnik arrived first from the Czech Republik, followed by Stephan Bechtel of Germany. Andreas Fuchs made a surprise appearance from Switzerland, then Gergely Nagy of Hungary and Jonian Grazhdani of Albania appeared. When Manuel Heider of Germany arrived we began the Beginner session.

The Beginner session included eight rounds where each player was timed to finish 10 games. ViennaSweeper started and stopped the clock for each round and awarded points.

Results are as follows:

Christoph forgot to plug in his mouse for the first round. Manuel insisted on getting the best times instead of finishing enough games. Robert was very pleased to win a round, and Thomas easily came in second.

After a break with snacks (and beer for the Czechs) we waited for Gyula Pap of Hungary to arrive before starting the Intermediate session. The criteria was lowest sum of 5 scores. I scored a 14 in the first few minutes and lost another on the last click moments later. Manuel finished few games but was very fast, easily achieving games in 15 or 16 seconds. Gergely broke his record with a better 18 while Thomas got a 19 without flagging. After 40 minutes Manuel took a small lead. After 60 minutes Manuel was ahead of me by only 0.03s! The final results are:

After another break we began the Expert session. Once again, Manuel played fast but had difficulty finishing games. I took an early lead with a 52 and finished five games in 20 minutes, wheareas Manuel was still trying to finish his fifth game after 45 minutes. At the end of the session, several players made the mistake of congratulating me for winning the Tournament. Here are the results:

Stephan Bechtel won all sessions for NF scores even though he is officially retired. Andreas Marx and Jan Farnik were very close, while Jonian and Andreas Fuchs each lost several places due to penalties. At this point, I led the competition by 5 seconds.

Then we started the Free session of one hour. In this time Manuel erased my lead and jumped ahead. While I finished only two games, he completed several low sub60 games and lowered his Intermediate average. When the dust settled, he became the second Vienna International Champion by the smallest margin of victory in tournament history.

Here are the final Intermediate results for the best 6 games:

Here are the final Expert results for best 6 games:

And here are the Final Results:

One click can make a difference...I lost a 14 on a bad last click. If I had clicked correctly, I would have won the Beginner, Intermediate and Expert sessions but still lost the tournament!!

Gyula came in 3rd, for the 3rd tournament in a row.
Thomas Kolar pulled an upset and narrowly beat Christoph for top Austrian.
Stephan had the 3rd best Intermediate session, but only the 7th best Expert session.
Jan and Andreas Marx differed by less than 0.05% for their Expert totals.
For those interested in different ranking methods:

There were four legs of Nonosweeper. I played for fun just to watch Stephan and the Farnik brothers compete.

I was inspired by watching Manuel, Thomas and Christoph. I have better mouse control than them, but they are all better using NF techniques to exploit difficult areas. Manuel taught me that slow and steady will get you sub20 games but not world records. Christoph noticed I puase and lift my mouse when I get openings. Manuel also noticed that I sweep in bursts but he sweeps at a constant rate. The result? In my first week home I got my first sub3 RQP on Intermediate, increased the number of sup4 3BV/s games and got my sixth 12 and third 11. On the downside, I am losing more games!

After the tournament everyone except Andreas, Christoph and Manuel left. As a result, they had to clean the rooms. Shame on us! Most of us met later at the U6 station to go bowling.

This was the first time Manuel had bowled but he started getting strikes in his second game. Jan is an exceptional bowler, closely followed by Gergely. Christoph is very competitive and was fun to watch as he set a record: 17 rounds before his first strike!

After three games Christoph and Thomas went home, so the rest of us played another round before Gergely and his girlfriend, Bea, decided to call it a night. The remaining five of us went for a walk. This journey included a drink in a pub, strange food at a kebab stand, a long time sitting on the pavement looking at our very large map, and an hour walk to the Farnik's hostel. We talked until we remembered that Manuel's train left in three hours, so the three of us walked until we found a taxi, arriving at Christoph's flat at 4 in the morning.

Manuel slept for an hour before catching his train at 6am. Christoph was still awake, because he had started programming when we arrived. We spent the morning organising shirts and making spahetti. Robert, Jan and Thomas arrived for lunch. We then took turns trying to solve 141 mines on Expert. Christoph got to 33 mines left, I got to 32, and Thomas managed 61. We then tried printing the shirts, but the only ink left was pink!

The boys went to print the shirts, and Yvonne and I went to a concert in the Golden Hall. Afterwards, we met again and all went out for Coffee. Then we went to a Viennese Hotdog stand for a very interesting experience.

All of us were wearing minesweeper shirts and standing on a street corner at 01:00 in the morning. A couple walked by and asked if we spoke English...that was a big mistake: Christoph taught them about minesweeper for half an hour! Eventually we let them go, but not before they wrote down our website addresses. They were both drinking, so hopefully they will think it was just a horrible dream.

We all said goodbye to Gergely and Stephan (and their girlfriends) at the train station. Christoph, Thomas, Jonian, Yvonne and I spent the day touring Schonbrunn Palace and the gardens. In the evening we visited the strange and wonderful Hundertwasserhaus. Jonian left his mouse at the competition so we went back to the University. Then we went to MacDonald's to play minesweeper...none of played very well: Thomas scored a 70, Christoph and I both scored 69 (but his was better!).

Yvonne, Jonian and I walked around the entire historical area of Vienna. The highlight of the day was eating lunch between the Rathaus and the Burgtheater. We dropped Jonian at the train station at 3 and spent the afternoon talking with Christoph. He got very involved introducing us to German music and suddenly realised we were going miss the train. Christoph ran with us to the station and we barely made it on time. We travelled to Warsaw during the night and arrived home with many interesting memories. 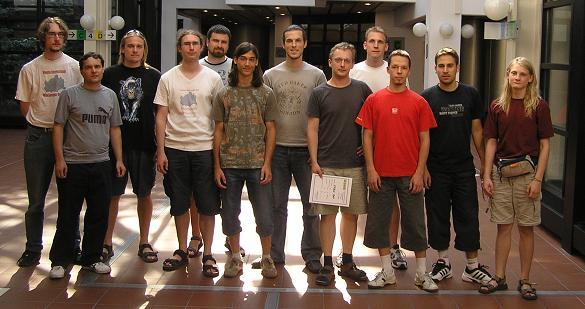 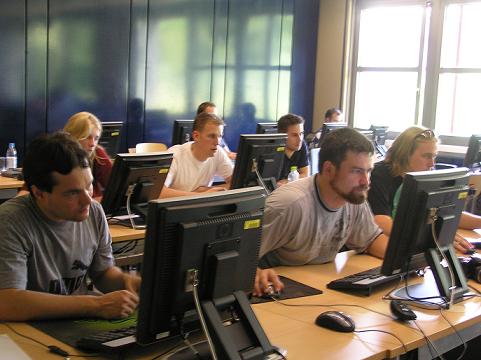 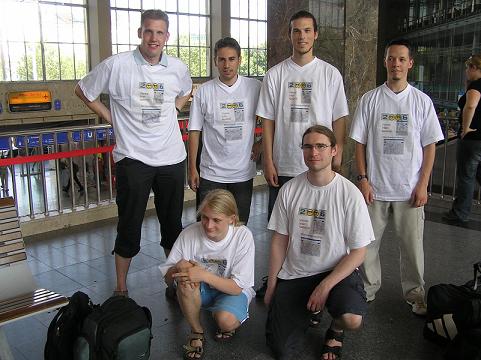 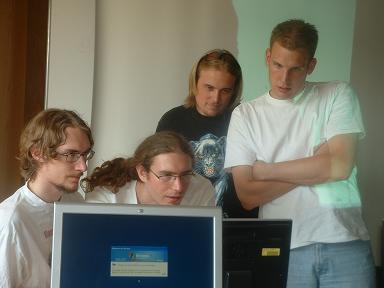 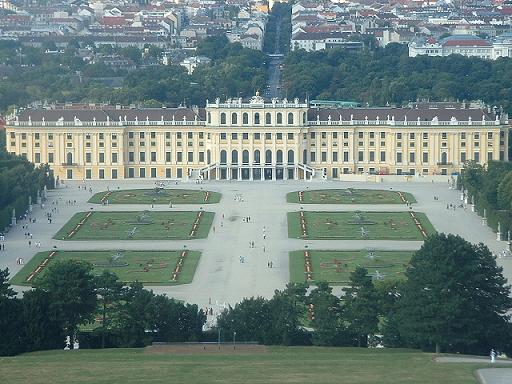