From MinesweeperWiki
Jump to navigationJump to search

3BV is the minimum number of left clicks required to clear a board. 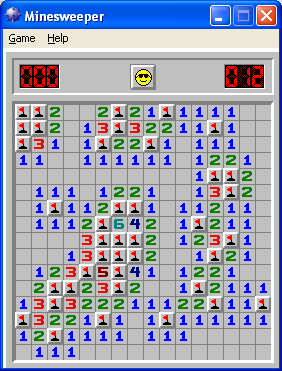 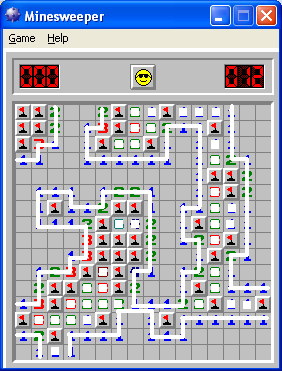 Matt McGinley (USA) claimed that a 53 by Mike Lowder (USA) was fake in the Guestbook on Dec 16, 2001. He believed the board was too difficult for a NF player. Case Cantrell (USA) tried to count the number of clicks required and announced that it was more than 100. He thought that 2 clicks per second was unlikely and told Mike that he should have more sub60 scores. Paul Kerry (UK) counterclaimed that he always took more than 100 clicks to complete boards NF. In fact, all one needed was was to click more efficiently.

The next day Khor Eng Tat (Malaysia) asked how to define difficulty. Lasse Nyholm (Denmark) counted the board and found that it required 207 clicks, while his own NF record of 65 required 161 clicks. He thought 200 was possible for a professional NF player, but noted the NF 52 by Vincent Yeh (Taiwan) required only 98 clicks. Ben Drucker (USA) then claimed that up to 4 clicks per second was possible as he had nearly achieved it on Intermediate.

Although soon forgotten, this was the birth of 3BV.

Lasse Nyholm first counted the required clicks to complete a board in December 2001. He did not take the idea seriously and casually mentioned it to Georgi Kermekchiev (Bulgaria). Georgi soon had a brainstorm and mentioned his idea 05 Feb 2002 in both the Guestbook and in Minesweeper Addicts.

Georgi thought the best measure for speed was not the score; instead, the best measure is the required clicks solved per second. He noted that a 52 by Vincent Yeh required only 98 clicks and compared this to boards Lasse Nyholm had completed. Theoretically Lasse could break the world record on that board. Slow games are often played better than fast games. He suggested the creation of a program to count required clicks. Three days later, Georgi suggested the creation of a 'Real Speed Ranking' based on required clicks solved per second. This would eliminate the Dreamboard problem from the rankings.

This caused confusion because Georgi did not explain how he counted required clicks. Doug Osbourne (USA) and Case noted that clicks per second does not reward efficient players. Yoni Roll (Israel) corrected them for confusing click/s with required click/s. Daniela Weingut (Austria) suggested counting required clicks as the total clicks less useless clicks. This was a good measure for Flagging skill but it was impractical to analyse without a program that recorded games. David Barry (Australia) finally clarified the situation and explained that Georgi had meant required left clicks to clear the board. He also noted that this accurately only measures NF skill. Later that day Yoni found the World Mouseclicking Competition website, and Lasse won it by performing 72 clicks in 10 seconds.

Sorin Manea (Romania) initially did not notice the difference between clicks and necessary clicks. Mar 16, 2002 he announced the creation of the Counter. His program counted left and right clicks as well as their per second ratios during gameplay. He eventually developed this program into the Recorder.

Benny Benjamin (Australia) set a new Expert record Jun 11, 2002 after jumping from 73 to 64 seconds. He decided the jump was a timer error and asked to have the record excluded. Stephan stated that the score was legitimate and asked if he had counted the board. This led to a brief discussion on counting clicks. Benny thought Stephan had a program to analyse efficiency, but Stephan replied he counted each opening and its borders as a click, and counted each remaining number as a click. A few days later Stephan finished a 119 click board in 55 seconds. Matt analysed some records from Lasse and concluded that his click solving speed would have completed the board in less than 40 seconds. Lasse currently held the WR with a 44. This was the first mention of solving speed since Georgi had suggested it four months earlier.

Stephan announced Jun 21, 2002 that Benny had named his counting method 3BV. Since the method had been introduced (in recent memory) by Stephan, this acronym stood for "Bechtel's Board Benchmark Value". Stephan was uncomfortable with the name, and recalled that someone had earlier suggested his method. Emmanuel Brunelliere (France) and Yoni stated they already used the technique, while Damien pointed out that Lasse had been first to use it. David reiterated his comment from February that 3BV was biased in favour of NF players, but Benny insisted the value would be useful.

3BV is accurate for NF players, but it is often possible to finish boards in fewer clicks by Chording. This can result in an IOE greater than 1.

3BV is a very good correlation for the difficulty of a board, but it is not perfect. Boards with the same 3BV can vary in difficulty.

Benny released his Minesweeper Reader Beta 2 on Jul 10, 2002. Its significant feature was screenshot analysis for 3BV. Steffan Pettersson (Sweden) then included 3BV in his second release of Global Mines in October 2002. 3BV is now used in the calculation of nearly all measures of speed, including IOE, RQP, IOS and OMB.

The first program to use 3BV/s was the Recorder by Sorin Manea in 2003. 3BV/s has since been included in every major minesweeper clone, most noteably the Clone by Rodrigo Camargo in 2004 and Arbiter by Rilian in 2005. A 3BV/s ranking (as suggested in 2002 by Georgi) was first created by Gero Wälz (Germany) in 2005 and later by other rankings.